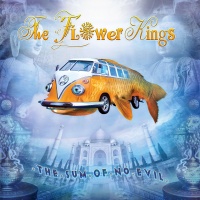 Yep, this record is definitely Flower Kings! The fantastic guitar playing, the great keyboard sounds, the magnificent bass chops, it’s all there!

The previous record (Paradox Hotel) is so much better than this release. It’s much more balanced, has more shorter compositions and more real songs. And the long tracks are still great tracks with more balance and more structure, less chaotic, more great melodies and hooks, reprises of themes, etcetera.

The best tracks on “The Sum of No Evil” are track 1 and track 6. And to be more specific: the first half of track 1 and the second half of track 6. Especially that last part is marvelous and classic Flower Kings!! I saw them performing this track live at Symforce and loved it immediately from the first time I heard it.

If you plan to buy “The Sum of No Evil”, than you really should go for the Limited Edition. Why? Because the best tracks are on the second disc! I really love them, and it’s a pity they did not fit on the first disc. That is why I give this release 3,5 stars instead of 3 stars.

Nevertheless I’ll be looking forward to seeing TFK live again this November. They are still one of the greatest live acts around and every live performance is a treat!

Let’s hope the next album will be better…  😉

(Originally posted on my Last.fm journal)