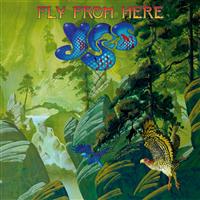 A lot is going on in the world of Yes and their current and former band members this year. A few months ago I discussed the excellent Yes Union deluxe box-set. But that was only the beginning. Check out this round-up of releases that I am looking forward to hear and have been released lately or can be expected in the next few months.

Of course there is the new Yes album titled “Fly From Here” that was announced end March. The album was co-written and produced by Trevor Horn, who also produced their hit album “90125” and their less successful “Big Generator”. The new album won’t feature Jon Anderson on vocals but their new singer Benoît David. This release also marks the comeback of Geoff Downes (The Buggles, Asia) behind the keyboards who has been a part of the band together with Horn when they recorded, released and toured with the “Drama” album.